Based on written and oral testimony about the Home in Tacoma project, I conclude that there is an overall generational disconnect between people who bought a home in the housing market 25 or 30 years ago and those who are trying to find a place to live today in the 2020's.

People who bought earlier in areas zoned single family made the assumption that nothing would ever change.  They have invested time, energy and money into the appearance of their yards and homes, and they are vocal when any change is suggested that would change any parameter of this arrangement.  Many seek to live in the homes that they are in for the remainder of their years and want to see that things stay the way that they are at least until they are gone.

Some areas where this generation settled even have private restrictive covenants that enforce limitations on what can be built.  It should be noted that there are some areas in the City who have not had the political energy to acquire view-sensitive status that the neighborhoods in the North End, West End, and Northeast Tacoma have been able to acquire.

To this generation, they do not understand why younger people and newcomers can't simply buy a starter home, build equity, and move into more affluent neighborhoods over time.  They ask questions like: 'Why can't they climb the ladder like we did?'  'Why is there such a rush to get this done?'

In some instances comment has veered into a very ugly, racist, and classist space. When it does, it is incumbent upon public officials to call it out, to recognize it as supremacist speech that reaffirms historic racist and classist practices and polices, and to not act in a reactionary way that supports this rhetoric.  However, that does not mean we can completely discount everything that is said by people in a neighborhood, because some people speak that way.

Switching gears, to people on the ground in today's housing market the environment is much different than it was 25 years ago.

With every passing day the supply of housing gets tighter and tighter, prices get higher and higher whether you want to rent or buy, with hundreds of inquiries now being made about a single unit of housing going up on the market.  The US economy stopped building housing during the Great Recession, but the population continued to grow.  Millennials moved back home in many cases, but then started to enter the housing market at an accelerating rate.

Incomes have increased since 1996, but they have done so unevenly by social class, creating an environment where housing prices are driven by those with higher incomes from those in professional positions seeking to live in "quality" neighborhoods.  Tacoma has an abundance of these neighborhoods that were all-but ignored by the rest of the region until fairly recently.  Attitudes towards driving have also changed substantially with the advent of telecommunications, cell phones, and delivery services, as well as recognition by the public of how housing choices influence overall health and impact to the environment.

As a result of changing attitudes there is higher demand for smaller housing that is more accessible to amenities and transit within walking distance.

The "Centers" Strategy to Housing Growth

That demand up until now has been fulfilled in Tacoma by a strategy based in geographic "centers," which focuses new housing into Downtown Tacoma and the Tacoma Mall regional growth centers with some development in the neighborhood mixed use centers.  However, some of these centers lack basic amenities in certain areas like parks and grocery stores, which are critical to supporting people of limited incomes, as well as features like libraries and restaurants.  Because of the scale of development in regional growth centers, requiring or being predisposed to elevators, underground or structured parking, sprinkler systems, internal gyms, and higher cost land, the units produced have generally been unaffordable to entire segments of the population who still need housing.  Since the solutions thus far have been mostly ineffective at generating truly affordable housing and the design standards to date have not blended new development with older homes there is much distrust between many in neighborhoods and with what the City is trying to do with Home in Tacoma.

What Home in Tacoma is and it isn't

Again, there is another disconnect between perception and reality for many in the community of what Home in Tacoma is and what they think it is.

Home in Tacoma is not attempting to make every neighborhood a mixed use center.  Six story buildings are not going to sprout up out of the ground to surround your single family home and cast it in permanent shadow.  But that large house across alley might be divided into a duplex on the inside and the house on the corner lot that burned down across the street a year ago might make way for some townhomes.  It is possible that residents may be conflating the changes in mid-scale zones with those being sought in low-scale, and to that end I think the City can strive to do better at communicating.

What the consultants tell us is that the Low Scale Residential provisions in Home in Tacoma are likely to make their biggest mark on reducing the growth rate in the cost of ownership housing.  Since these would conceivably apply city-wide, they may help people today who might have had sufficient income and wealth to buy into established neighborhoods a few years ago, but are shut out of the market now.  The Mid-Scale changes being studied are likely to improve the availability of rental housing initially.  This housing is likely to be at multiple price points, but in targeted areas with access to transportation and services.  Over time some of this new multifamily housing may convert to ownership housing that could be considerably more affordable than new multifamily construction.  (This Tacoman got his start in ownership housing with a 1-bedroom condo conversion.)

Looking at Home in Tacoma from a historic perspective, the project is a form of Back to the Future.  It's an attempt to get back to traditional neighborhood development, which is what the Tacoma Comprehensive Plan refers to as the "pre-war compact" neighborhood pattern that shares the following characteristics:

1) Constructed prior to World War II,
2) Built around quality public transportation,
3) Have complete or near-complete sidewalk coverage with street lighting, and
4) Were never fully transformed for the automobile.

These are some of Tacoma's best-loved neighborhoods: the North Slope, the Stadium District, Wedge District, North Hilltop, and Lower 6th Avenue among others.

For pretty much everyone in these historic neighborhoods, that predate the city's 20th century zoning system, neighborhood satisfaction is very high.  Sometimes all it takes is one corner with a bodega, laundromat and neighborhood bar to create a functioning neighborhood center.  These mixed-income, mixed-housing type neighborhoods that couch large homes next to duplexes, small apartment buildings and condos with courtyards, are pretty much impossible to find in Pierce County outside of very specific areas in Tacoma.  They are diverse and unique-the antithesis of a monoculture of cookie-cutter homes.  They are part of what makes Tacoma, Tacoma, and there is increasing demand for neighborhoods such as these.

While we will never fully recreate the conditions to generate these types of neighborhoods all at once, there can be gradual, controlled changes to existing neighborhoods with enough infrastructure and services, to support new housing and small businesses.  They will help to match what a new generation of residents are demanding a Tacoma not from 2010, but from 1910. 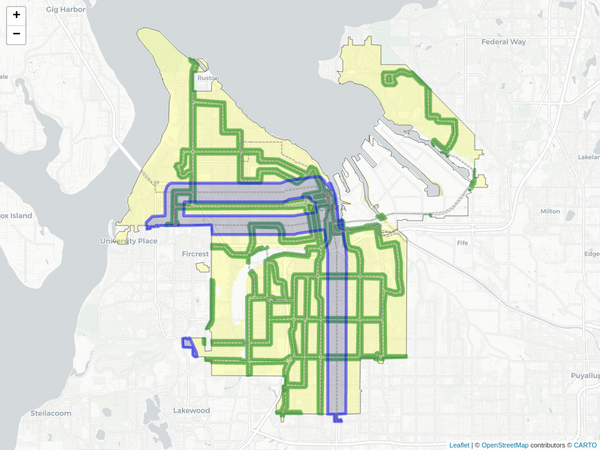 For Tacoma to continue to be a welcoming city to people who make less than the regional median income, we must plan to build more housing in such a way that people will be able to afford it, regardless of their income level or family size.