How far can a traveler on public transit at 8AM on a Monday go in an hour in the Puget Sound region?

The answer depends on where you start.

If a rider lives near a major transit hub in a central city, Seattle, per se, you can get just about all areas of the city as well as everywhere in the region - Bellevue, Lynnwood, Federal Way, Everett and Tacoma.  Enormous opportunities for access to employment, cultural institutions, and education are possible without the use of a private vehicle.

Try it yourself in the web app below:

In Tacoma if you start from Tacoma Dome Station, you can make it to a lot of places, but to make the journey to Tacoma Mall will set you back 45 minutes of your day.

If you're coming from Central Tacoma or elsewhere, you can make it most places in the city of Tacoma, and maybe to Downtown Seattle, but not much else.  Why?  For one, there is a disparity in resources relative to Seattle and secondarily there's a difference in the structure of the networks.

King County Metro is funded with a 1.2% sales tax, with the City of Seattle providing supplemental funding for frequent transit service.  King County Metro, in tandem with other transit agencies in the Central Puget Sound provide high quality frequent service and dense options for transfers in walkable, mixed use areas.  Much of King County is served by a healthy mix of regional, limited-stop services from King County Metro and Sound Transit as well.

Pierce Transit on the other hand is funded at half the rate (0.6%) in a county with a smaller tax base, with no supplemental funding from the City of Tacoma.  Options for transfers between routes are generally restricted to suburban transit centers at relatively low frequency.  The Tacoma Mall Regional Growth Center in particular is not served by the regional transit system with express buses, nor light rail.  Further, north-south routing in Tacoma is highly limited.  For instance in the Proctor neighborhood, based on the data it would take a full hour to make it to the Tacoma Mall at 8am.

Since the quality of transit service is dependent upon on sales tax revenue, which is reflective of an area's economy, tax rates, and past decisions of lawmakers who have chosen one form of urban development over another, makes transit service prone to geographic disparity.  The State of Washington plays no part in the funding of local transit service and leaves questions of equity up to local jurisdictions.  Federal revenue grants provide more funding to agencies with more resources to begin with further deepening inequities inherent in the system.

Hopefully this tool will help some to understand just how limiting it is to live in Pierce County compared with the rest of the region and recognize the importance of improving transit equity for the benefit of commuters and other transit riders across the region.

This application was built in the statistical language R using the Shiny and Leaflet packages. It is supported by Open Trip Planner, OpenStreetMap data for the State of Washington, with regional General Transit Feed Specification data available from Sound Transit. 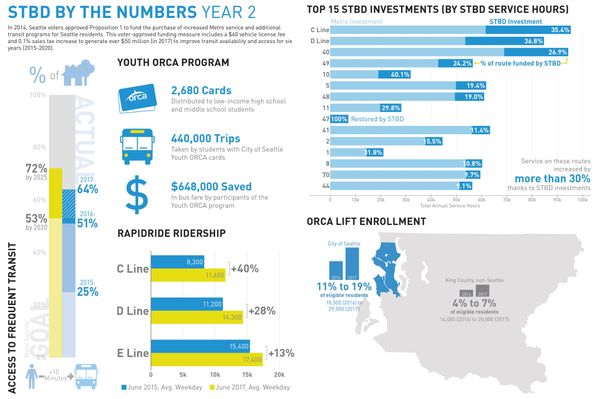